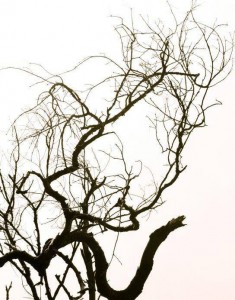 Poems based on family stories and memories with accompanying photocollages.

“In Ohio Lonely, Carrie McGath merges old photographs with collage and verse to navigate the liminal space where family history and imagination often intersect. Her poems remind us how we measure our identities through the faces of our ancestors, how history is legend is myth. What I find most endearing in these poems is McGath’s constant pleading to the sepia tone subjects, men and women whose fates have long been decided, as if her insistence can transcend time and bring new growth to her family tree.”

“Don’t mistake Carrie McGath’s project in Ohio Lonely as nostalgic in a pejoratively clichéd way, a naïve and dishonest looking back where every lost family member is steeped in sugary sepia. No. McGath doesn’t just understand what nostalgia, literally, means: the ache for that which is ours. Her nostalgia is marrow-deep. “I look for the woman inside of me through photos…”, she writes in one poem. Nothing more indelible than that manic stasis of the elegiac gaze. Yes, indeed. McGath’s poems fade not away. Thank God.”

So Sorry to See You Go 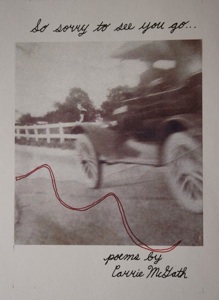 Poems inspired by Carrie’s  Masters thesis research at the Newberry Library. Her thesis,”The Desire for Taboo, Voyeurism, and Role Play: The Presence of the Circus in the Work of Elizabeth Ernst, Glen C. Davies, and Ed Paschke,” is available to read at the Flaxman Library at the School of the Art Institute of Chicago.

“Like a series of vaccinations, these new poems from Carrie McGath jut out like needles, oozing at the edge a distilled disease and the possibility of remedy. In reading you might feel a little prick and the images, sometimes fragmented, seep into you, effecting visions: cloistered domesticity nevertheless yielding tiny worlds, exterior scenes that are claustrophobic for the alienating strangeness they impart, hints of violence perhaps welcome for their share certainty, and everywhere a longing for love. It might be erotic peculiarities or the simpler passions of companionship, but in these poems it is the gossamer thread of meaningful connection — ever fragile, ever tenuous — that makes sense of the world.”

“McGath, with each elegant piece, lets us chew on deliciously expressive subject matter.  Yes, like fine wine, I know it has accents and suggestions far beyond my humble comprehension.  But dammit–I know it’s good stuff and you will too.”

“Carrie McGath’s poems stem from the throne of hindsight/from an eye of hindsight, raw and without a quaver of speculation, down to ‘Aerialists’, a kindred last moment with the poet Deborah Digges.”

A collection of poems inspired by Mary Ellen Mark’s photographs of the women of Ward 81 at the Oregon State Hospital in the 1970s.

“… Her book Ward-Eighty-One is a response to photos by Mary Ellen Mark taken at the Oregon State Hospital—photos of women who have endured intense suffering, internal, external, or likely both. In this collection and others, McGath reimagines a world that opens to grand possibility while simultaneously remaining painfully claustrophobic,  and therefore married to a new kind of truth.”