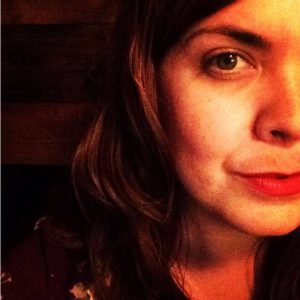 Carrie has studied with many distinguished poets including Herbert Scott, Mary Ruefle, J. Allyn Rosser, Mark Halliday, Nin Andrews, William Olsen, and Nancy Eimers. Most recently Carrie studied with poet, Christina Pugh as well as fiction and nonfiction writer, Luis Alberto Urrea and poet, Daniel Borzutzky at the University of Illinois at Chicago. Carrie McGath’s first collection of poems, Small Murders, was released in 2006 by New Issues Poetry and Prose. Since then, Carrie has self-published five limited-edition chapbooks, including: Ward Eighty-One, The Chase, So Sorry to See You Go, Ohio Lonely and Dollface:Poem-Songs. This latest chapbook, Dollface, contain poem-songs between artists Unica Zürn,  Hans Bellmer, and the speaker who is a voyeur about to enter their world. These are imagined conversations and thoughts existing within this passionate and tumultuous relationship. This chapbook will be available for purchase very soon in the shop.

Carrie is listed on VIDA’s ‘anti-list’ of Under-Acknowledged Women Writers where author, Monica Drake writes: “… McGath reimagines a world that opens to grand possibility while simultaneously remaining painfully claustrophobic,  and therefore married to a new kind of truth.

In addition to teaching and working on both her poetry collection and a collection of essays, Carrie hosts a monthly poetry series called The Poetry Salon at City Lit Books in the Logan Square neighborhood of Chicago on the 3rd Wednesday of each month at 6:30. The series opens with an open mic for poets, followed by a different feature poet each month.

Carrie recently earned her PhD from the University of Illinois at Chicago (UIC) where she studied poetry in The Program for Writers. She also teaches composition and creative writing at UIC  and she is an adjunct at Lewis University. In the Spring of 2021, Carrie received the Paul Carroll Award “for an outstanding advanced PhD student.” The award “considers the totality of  scholarship, writing, and service to the program.” In 2019, she won the AWP Intro Project Award in poetry for her poem, “Dear Anhedonia” that was then published in the Tahoma Literary Review. You can hear Carrie read the poem here.